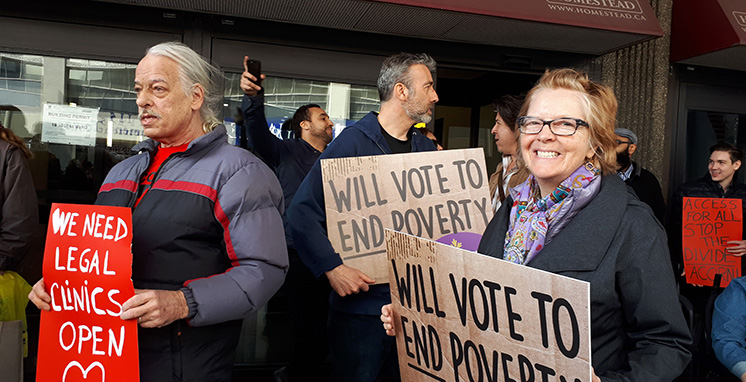 The clinic is run by a volunteer board of directors and we are funded by Legal Aid Ontario. All help is private and confidential.

We serve low income residents from anywhere in the City of Hamilton, including the Mountain, Stoney Creek, Dundas, Ancaster, Waterdown, Flamborough, Mount Hope, Glanbrook and Winona.

Hamilton Community Legal Clinic was launched on April 1, 2010. Our not-for-profit organization is an amalgamation of the three independent community legal clinics that had been operating in the City for over thirty years, Dundurn Community Legal Services, Hamilton Mountain Legal & Community Services and McQuesten Legal & Community Services. The clinics merged so they could provide legal services to more low income Hamilton residents.

In July of 2012, the Clinic announced that it had earned the designation as an organization providing public services in French under the French Languages Services Act. This law guarantees the public the right to receive services in French from the departments and agencies of the Government of Ontario in 25 designated areas, including Hamilton.

Our aim is to be as accessible as possible to those who may need our services. We are committed to adapting our services to meet community needs and working with individuals, groups and service providers to improve legal rights and promote access to justice. Our staff and board members are active in local as well as provincial networks, agencies and coalitions to further this goal.

Our clinic is physically accessible for persons with disabilities. We will arrange for interpretation services if they are required.

Our history before amalgamation

In 1967, the Ontario Government introduced legislation to create the Ontario Legal Aid Plan. This was the first formal system of government funded legal assistance. Providing equal access to justice for poor people has remained the guiding principle for legal aid in the province ever since.

Community legal clinics were designed to fill gaps in services to low income people. The idea was to provide what has become known as “poverty law” services, areas of law such as welfare, tenant disputes, workers’ compensation and employment insurance. The first Ontario clinic was Parkdale Community Legal Services in Toronto. It opened its doors in 1971.

McQuesten Community Legal Services was established in 1978 and served east Hamilton, parts of Stoney Creek and Winona until amalgamation. McQuesten grew out of work done by the McQuesten Community Association which was concerned with neigbourhood youth crime and other neighbourhood issues. McQuesten was the first clinic in Hamilton to receive funding from the provincial legal aid plan.

Mountain Community Legal Services was started by members of the Dundurn Board of Directors along with other citizens who saw the need for service on the Mountain. The clinic opened its doors in December 1985 at Fenworth Plaza on Fennell Avenue. It served the Mountain, Ancaster and Stoney Creek Mountain with a small staff until the amalgamation.

The three clinics collaborated a great deal over the years, both at the Board and staff level. They began to have joint Annual General Meetings and set joint goals for serving the community. They even shared a web site. Eventually, it became clear that in order to increase the amount of service the clinics in Hamilton could provide to low income clients, they needed to come together as one organization.

The three Boards and staff then worked together to create Hamilton Community Legal Clinic. In June 2011 staff relocated to 100 Main Street East.

Please see our 2020 Annual Report to learn more about the work that we have been doing for the past 10 years.