Apply for Services
Please note that our office will be closed from Friday, December 24, 2021 to Friday, December 31, 2021 for the Christmas Holiday season.   We will be happy to assist you when our office reopens on Monday, January 3, 2022 at 8:30AM.
Covid-19 update: We continue to provide legal services via telephone and online. If you do not have a phone or internet, we may be able to serve you at our office. Please push the intercom button to talk with us during business hours Click here for more resources 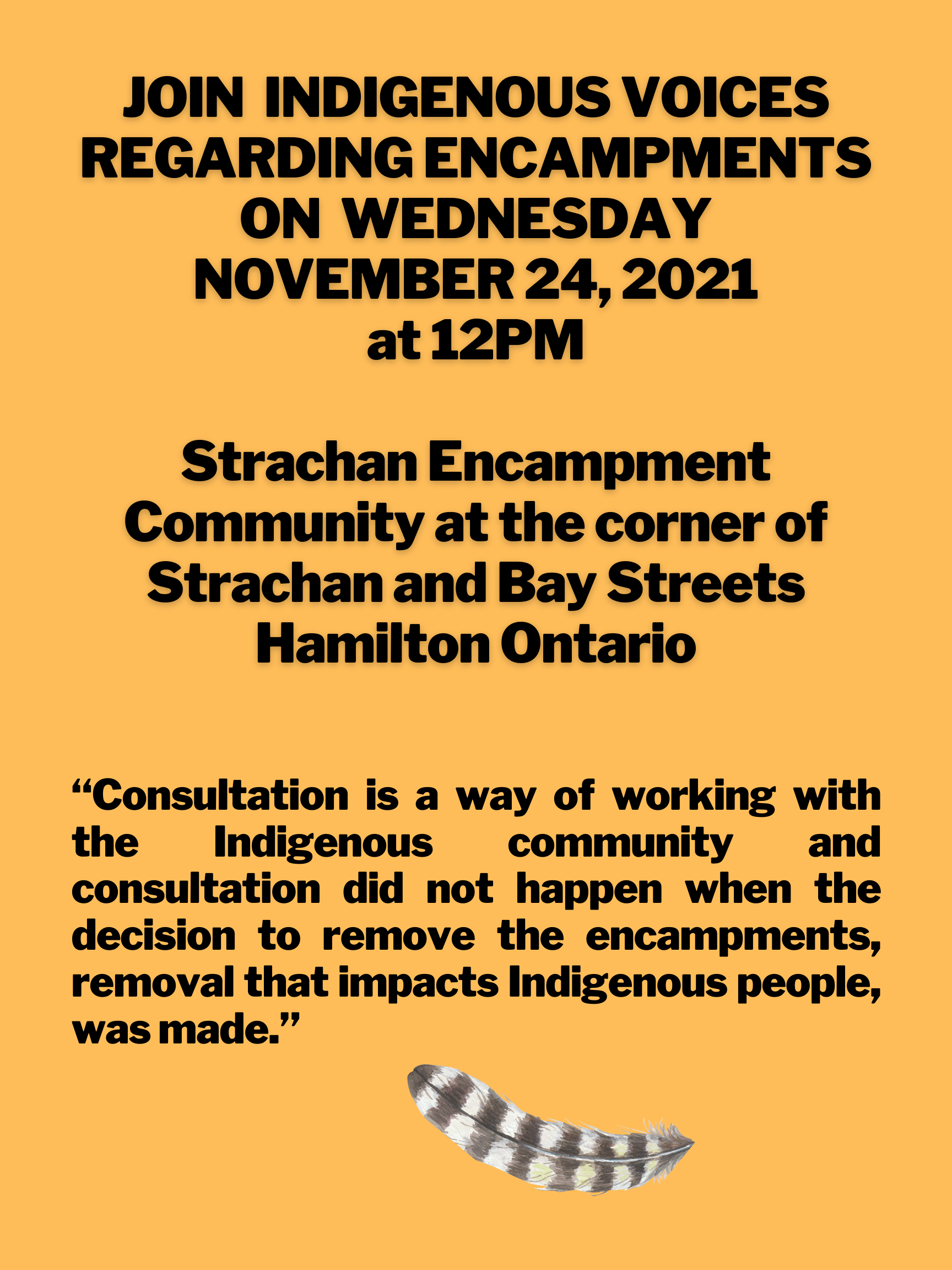 INDIGENOUS VOICES: ENCAMPMENTS IN THE CITY OF HAMILTON ONTARIO

Indigenous people see the impacts of colonization on a daily basis. We are assured to either hear, see or feel these impacts of colonialism, racism and discrimination every single day. Ongoing colonial and systemic policies continue to disproportionately impact the lives of Indigenous peoples across Turtle Island, including within the City of Hamilton.
Canada continues to oppress Indigenous people through the use of harmful colonizing polices.
These policies include the doctrine of discovery, the Indian Act, the 60’s scoop, residential schools, child welfare systems and the colonial legal system.
The Assembly of First Nations notes: “The Doctrine of Discovery emanates from a series of Papal Bulls (formal statements from the Pope) and extensions, originating in the 1400s. Discovery was used as legal and moral justification for colonial dispossession of sovereign Indigenous Nations, including First Nations in what is now Canada. During the European “Age of Discovery”, Christian explorers “claimed” lands for their monarchs who felt they could exploit the land, regardless of the original inhabitants. This was invalidly based on the presumed racial superiority of European Christian peoples and was used to dehumanize, exploit and subjugate Indigenous Peoples and dispossess us of our most basic rights. This was the very foundation of genocide. Such ideology led to practices that continue through modern-day laws and policies.”
The Indian Act was created in 1876. The main goal of the Act was to force the First Nations peoples to lose their culture and become like Euro-Canadians, otherwise referred to as forced assimilation. The Indian Act has been changed many times and it is still an oppressive tool of the Canadian government. It does not affect either the Métis or Inuit.
These tools of the colonial project have led to Indigenous people’s loss of land, language, identity, and way of life.
A clear example of the policies that cause harm is the recent court ruling that enables the local municipal government of Hamilton to forcibly remove homeless people from public spaces. This violent act further displaces encampment residents, destroys any sense of safety and/or security by dismantling the only place they call home and violently disposing of personal belongings. Replicating 500 years of police and government sanctioned colonial violence.
Indigenous people are over-represented in Hamilton’s encampment population.
The Truth and Reconciliation Calls to Action have been committed to by the government of Canada to try to rectify some of the wrongs done to Indigenous people. It is a tool we use to remind that there is a necessity to work with Indigenous people and communities to change the way things are done and reduce the harm. Consultation is a way of working with the Indigenous community and consultation did not happen when the decision to remove the encampments, removal that impacts Indigenous people, was made.
Hamilton and Burlington lie within the Haudenosaunee and Anishinaabe territories and fall under the dish with one spoon and the two row wampum treaty agreements. Treaties are binding agreements between two groups and there are responsibilities to all that these agreements include. Have municipal governments forgotten they are treaty partners? Or have they failed to ever acknowledge and put this relationship into practice?
This is an important point that we all need to recognize; each and every person here has a responsibility to educate themselves, support reconciliation and understand our treaty obligations. The education system has proven to have failed Indigenous peoples and been used as a tool of colonialism. We have seen how the education system has failed through the confirmation of unmarked graves at residential schools that has made the news headlines for months and many Canadians just learning about these acts of genocide. We are in charge of our own education and it is no longer acceptable to say “I didn’t know”. Ignorance is not bliss.
We recognize our roles and responsibilities and are speaking out against the mistreatment of our brothers and sisters who have had to make encampments their homes. The Indigenous way of being, our way of life and our roles and responsibilities DO NOT INCLUDE treating other human beings with such disrespect to dismantle their homes and toss their material possessions to the garbage. This is not how we manage our relationships with others. Our way of being includes consultation, compassion, empathy, caring and love.
Removing the encampments without alternatives for those displaced is taking away the spoon. When we take away the spoon, we are feeling privileged enough to interpret the treaty, Dish with one Spoon, in a manner that justifies our behaviours and accommodates only our needs and wants. This was not the intent of the treaty on Indigenous land. No one is privileged to interpret the treaty to benefit only them and this includes elected officials such as mayors and council members as well as policing agents who carry out their mandates.
It is our responsibility to remind Canadians that you are on Indigenous territories and we have agreements that are older than ourselves, older than any colonial law. Through these agreements we have roles and responsibilities to each other and the land. Wearing an Orange Shirt one day and violently dismantling encampments the next is a contradiction, example of a performative stunt with no real intention for true systemic transformative change to ensure we are upholding treaty obligations and working towards reconciliation.
If the City of Hamilton is truly committed to working towards reparation and reconciliation then the removal of the statue of Victoria, your Queen, is essential to ending the oppression that a majority of city council embraces toward Indigenous people. By not having her already removed reminds us that the city is not hearing the voices of Indigenous people and they continue to trigger Indigenous people with the same trauma, plus, associated with the John MacDonald statue. TAKE DOWN YOUR QUEEN. Indigenous people do not need constant reminders of genocide.