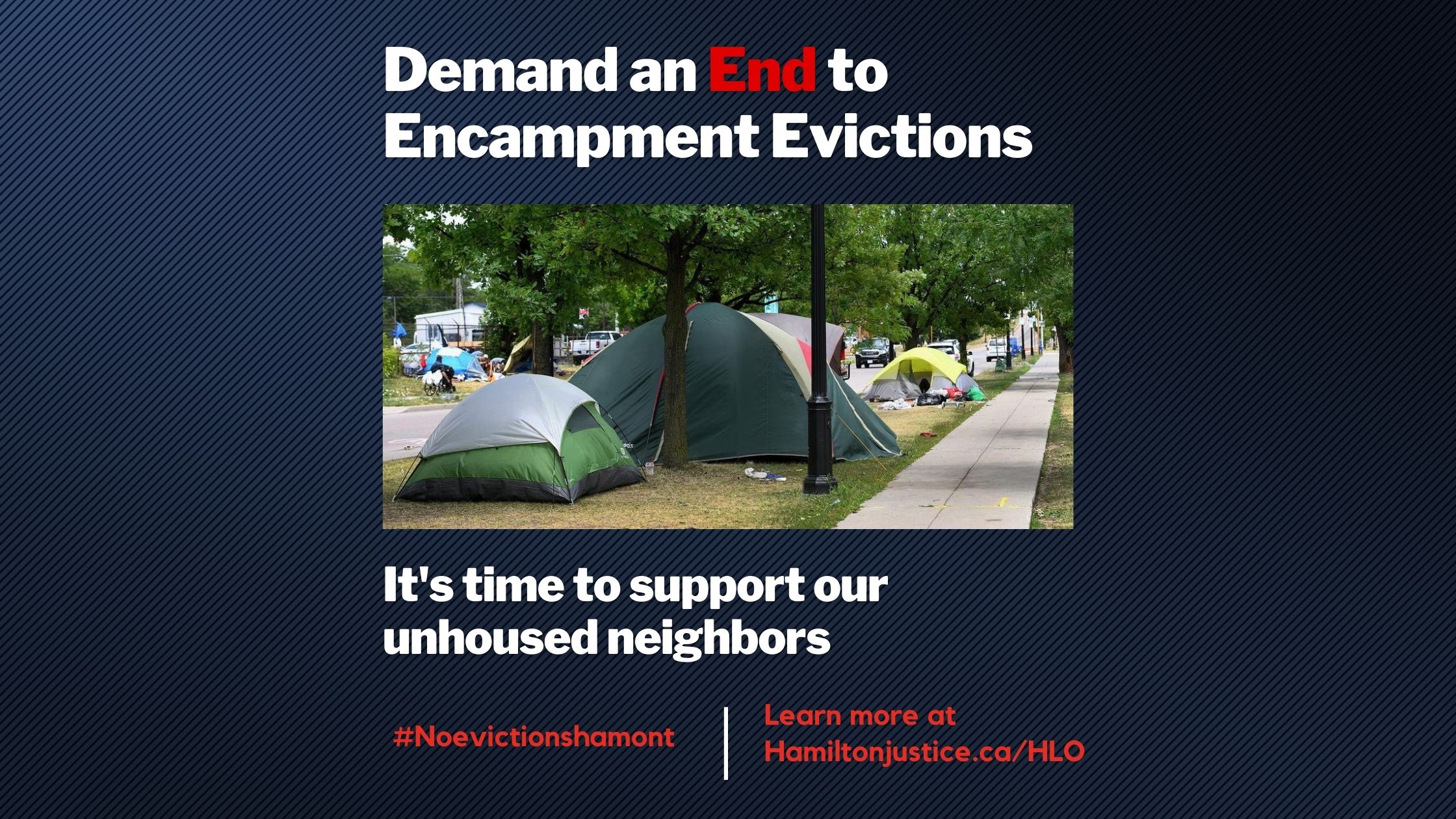 The City of Hamilton’s sudden decision to end the Encampment Protocol is a misguided attack on people who are already struggling to survive without adequate shelter, food, medical care, bathrooms, and potable water and without protection from the elements and threat of violence. The decision was seemingly made without meaningful consultation with encampment residents and community advocates, and fails to recognize the continuing housing and shelter crisis in Hamilton.

In the spring of 2020, Hamilton Community Legal Clinic and Ross & McBride worked with community partners to preserve people’s right to stay in encampments. This was in response to a lack of shelter and affordable permanent housing options, and the health and safety risks associated with ongoing displacement, particularly during a global pandemic. We obtained an injunction to prevent the City from forcing people to leave their tents. The injunction remained in place for approximately two months. Significant objectives were accomplished during this time: outreach agencies were able to facilitate access to healthcare and basic needs and connect individuals with much needed supports, and the risk of Covid infection and transmission was reduced.

In the fall of 2020, a settlement was reached. The settlement created an Encampment Task Force and a people-centred Encampment Protocol. The Protocol was a reasonable middle ground approach which recognized that adequate, secure affordable housing for the population must be an end goal, but forcibly removing people from their encampment without adequate shelter and housing options is harmful. The Protocol itself was informed by “A National Protocol for Homeless Encampments in Canada” authored by the UN Special Rapporteur on the right to adequate housing, Charter protected rights and human rights.

Under the Protocol, the City was required to assess the individual needs of encamped persons, which could result in their ability to remain encamped indefinitely. It also required the City to come up with individualized housing plans, and take a person-centred approach to avoid unnecessary trauma. Hamilton Police Services have been supportive in the application of this Protocol, effectively using it as a means to ensure that individual rights were engaged prior to any enforcement measures were taken by the City.

Despite the Protocol, many encampment residents continue to remain without housing, signalling the root of this problem: a lack of adequate affordable housing, long term health care supports, and safe shelter spaces. None of these fundamental root causes of homelessness are being appropriately addressed, which simply leaves unhoused residents to bear the brunt. City Council’s decision to re-enact By-laws to evict these residents will not lead to a reduction in encampments. At best, it may lead to their reduced visibility as people try to go further off-grid, and deepen the isolation of unhoused persons.

We are mindful of the brutal eviction tactics used by the City of Toronto against encampment residents. We take the position that dismantling and evicting encampment residents is an act of violence. De-escalation and acknowledgment that our community lacks the resources to resolve the encampment concerns should be the starting point for discussion. While we acknowledge that living in encampments is not a long time viable solution, the violent act of evicting and displacing residents without adequate shelter options is a violation of the right to the security of the person, equality rights and the human right to housing.

Our community at large has shown itself to be largely compassionate towards unhoused persons living in tents. The City of Hamilton has a duty to this population, along with other constituents. We call on the City to do the right thing: stop dismantling encampments and sit down with community stakeholders to come up with a new strategy that respects the human rights and dignity of the encampment residents.